So, Canada doesn’t have a great healthcare system, and living next to America’s nightmare-grade healthcare system doesn’t change that. The Baby Boomers will go out with a blown budget, if we don’t start addressing these problems now.

What is interesting is the issue’s isolation to specific parts of the healthcare system. In hospitals, everything is good, if not better than the service I’ve experienced anywhere else in the world. The problem in Canada is very specifically the administration and family physician experience.

This is pretty clearly illustrated in a recent study which found only 43% of Canadians could get a same or next day appointment any healthcare professional.

The problem with getting the family doctor process so wrong is pretty simple. Most of the time when you get sick, you just can’t wait for a week. In Canada you either lie in bed hoping it goes away or go to an Emergency Department (ED) of a hospital. As noted by the CIHI “Canadians appear to use the ED more frequently than people in other countries.” and “47% chose to seek care in the ED because they could not get an appointment with a primary health care provider”.

It is common knowledge that going to a hospital when you have a really sore throat or muscular pain is a bad healthcare outcome and most healthcare systems push people to go to clinics. It not only costs more it also endangers critically ill people and doesn’t give you the important long term care that you get with a family doctor.

So what gets in the way of going to a doctor in Canada and what can we do? Three things stand out.

The first healthcare barrier is the plastic card that says that you have Healthcare in the first place.

Canada guarantees healthcare at a federal level but allows provinces to choose how to best implement it at the Provincial level. A lot of the hassle with healthcare involves provinces trying to not pick up the bill for residents of other provinces and countries.

If you go to a clinic and do not have a card (or it’s lost or expired), you pay up front for the appointment. But if you go to the hospital, you can deal with the payment and paperwork later, which means we essentially encourage emergency department visits for people with mild conditions who haven’t kept their paperwork up to date.

In order to get the healthcare card, you have to go through a bureaucratic process if you move between provinces. You also have to renew the card, often with a mailed renewal form and a cheque.

Somehow, we live in the dystopian future where the government is spying on our phone calls but won’t even give us the convenience of knowing where we reside. I’ve had to sit in the massive government office for hours with throngs of other unfortunate sick bastards to get my piece of plastic. It often feels like doing paperwork in an ambulance. A year later, the card expired, and the renewal got mailed to my old address. I had to do the whole thing again, this time as a completely different sick bastard. 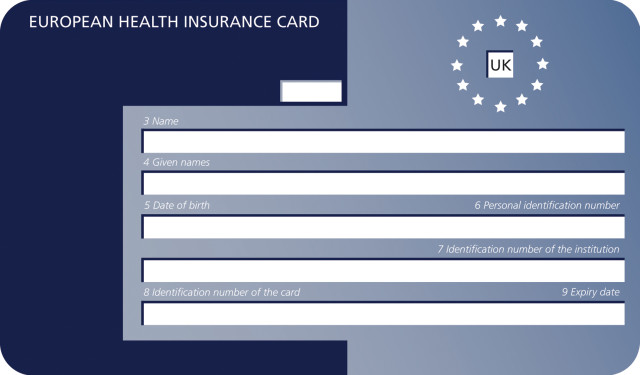 We could also allow people to submit a healthcare number along with any government-issued photo ID. The government of Canada already enables the provinces to verify a person’s residency through the electoral role, although this could be combined with the CRA to make a much better database. The healthcare system of the province could then decide if they want to double check a random selection of people for residency. For example a province might find that it is worth doing random checks on people living near a border, but that they are better leaving the vast majority alone.

For real convenience, Canada could follow the lead of a political union like the EU, which has a European Health Insurance Card. Instead of duplicating the same “where do you live?” system 13 times, this could be provided federally.

But really, the healthcare card is annoying, run-of-the-mill bureaucratic stuff. The bigger issue is once you get your free healthcare card, you can’t actually see your free doctor. It feels as useful as a complimentary dinner waiting for you at the top of mount Everest.

Lines are how we handle excess demand, which is a whole area economic research called Queuing Theory. If you were to never see a line in a hospital, you should actually be annoyed as a citizen as it shows there is overcapacity, which is wasteful. The lines range in length, depending on where you are or what you want. In most places there are multi-hour queues to simply see a doctor and multi-year queues to get a family doctor.

You snooze you lose. You also lose if you have kids or a job.

I have lived in Canada for more than a decade and still don’t have a doctor. I know people twice my age who have never had a family doctor. Obviously the number of people who want to see a doctor exceeds the number of appointment slots available. This means government has created lots of crappy little hurdles to jump over to prove you really want it.

What the government in Quebec has is a multi-stage queue defence. If you want to try your luck getting an appointment for the next day, you ring a call center the day before, which is sort of like a radio call-in show. Usually that won’t work, so you have to show up first thing in the morning and get in line, which is why doctor clinics in Quebec always have this profile on google maps.

I have done this several times and will never forget the four hours I spent leaning on a doctor's office wall with intense back pain, despite arriving at opening time. If you show up any time after mid-morning, they usually tell you to not even try.

Healthcare Bills As A Challenge

In the past 12 months, were there times when you had serious problems paying or were unable to pay your medical bills?

The solution is pretty simple: pay something (anything). There is a really broken part of the human brain called the Zero Price Effect. This is the effect that makes two million people line up for hours to get a free $6 breakfast when the minimum hourly wage is around twice that. The average Canadian earns $27/hour. Every day, tens of thousands of Canadians take time off work and instead of spending it with their family or on holiday, they sit in a room for hours waiting to see a doctor. Because of the way we are wired, they also think they just got something for free.

Most wealthy countries have some form of co-pay for doctors. It is almost exactly the same as the co-pay for pharmaceuticals or dentistry which many Canadians will already have experienced. You pay a fraction of the cost, the insurance company picks up the rest. For doctors visits in Canada I would propose a very low co-pay that is just enough to trigger rational behaviour about visits to a doctor. You can still have a free doctor, or walk-in clinic as a fallback. In Australia they have subsidised regular clinics where you pay around $40 alongside completelyd free bulk billing clinics if you have no money. In New Zealand you pay a similar amount and the fallback is going to the hospital as we do here. The grand bargain I would make for this solution to work is this:

"Give us one hour of your salary, and we will let you book an appointment within the next 48 hours"

With this we are simply taking a portion of that time they spend in a waiting room or participating in a call-in show to give them a convenient and modern healthcare experience.

Compared to other OECD countries, Canada has a low per-capita number of doctors.

It's interesting to note that despite high pay both America and Canada have a doctor problem. Could there be unnecessary barriers to entry?

Doctors in Canada are paid very well, much of which is a product of competing with America where the average doctors salary is around $330,000, which is also a lot higher than most developed countries.

It is not easy to become a Medical Doctor in Canada because a low rate of acceptance to medical schools paired with some very arbitrary quotas. Industries often suffer from some degree of regulatory capture which equates to a formalized last-one-in-close-the-door protectionist strategy. There is a recognised issue with people going to see alternative practitioners when they feel rushed through and ignored by doctors. This means the shortage of available time with a doctor pushes Canadians to visit fake doctors at incredibly high rates, partly because even if they can see a doctor, they are often slotted into a rushed and impersonal production line appointment. Wham, bang, at least it’s free man.

Let more people into medical school. A lot of the people missing the cut would make fine physicians and are definitely better than having a fake doctor. Quotas should be removed and incentives placed on medical school graduates for staying in the province they graduated from. This could be in the form of interest free student loans or schemes that help graduating doctors buy their first house in Canada so they can lay down roots.

Medical schools should be focused on outcome-based policy for the good of the population rather than the medical community. Much like the government’s inflation targets, there should be a targeted doctors-per-capita which is maintained. If the country is falling as far as we are below the OECD average, then funding and additional medical schools are needed to boost our numbers.

Canada has a long history of defining itself by the United States, and it seems we are at it again. America has a radically different and much worse healthcare system. Imagine if South Korea wasted time comparing its economy to North Korea. Just as South Korea’s economy competes with Japan, Taiwan and China, Canada has to look at peers like Australia, France and Germany. If we don’t, we are not challenging ourselves. We live in a global world and spending any time comparing ourselves to the country with the least-efficient healthcare system in history makes no sense. To excel, Canada needs to be secure enough to move past the universal healthcare debate and onto the business of making our universal healthcare work better which often involves mixing in some .

Contributors
Paige Saunders: A social entrepreneur who finds practical solutions to complex issues.
Brent Reaney: An editing gun who can punch-up and clean copy in minutes
Related
Howser Using technology to do something different when it comes to the homeless and the cities they are in
North America's Special School Buses Why does North America have special yellow school buses?
The Rules Change 2016 was the 1969 of our lives, although this time it wasn't free love, a generation coming together and rocketry. Well, maybe rocketry.
Wrong Tool For The Job Blockchain technology is being applied to everything, but it often isn't the right tool for the job now and possibly... ever.
The Nuclear Option All of the worlds nations are doing business with suicide bombers, but contrary to popular belief we don't have to.