For years, on Rue Clark there had been a giant robot mural by pixel pancho which I liked it so much, I went to check out his work online.

But it was at least $8,000 for anything I was interested in, requiring a year of overtime to earn, which got me thinking. What if, instead of spending those overtime hours at the office, I spent them painting? If I focused on learning to paint just one thing, robots, could I reach the skill level required to paint like a professional artist? Could I come away with a nice painting, and the ability to make more? Could I be the man who taught himself to fish? 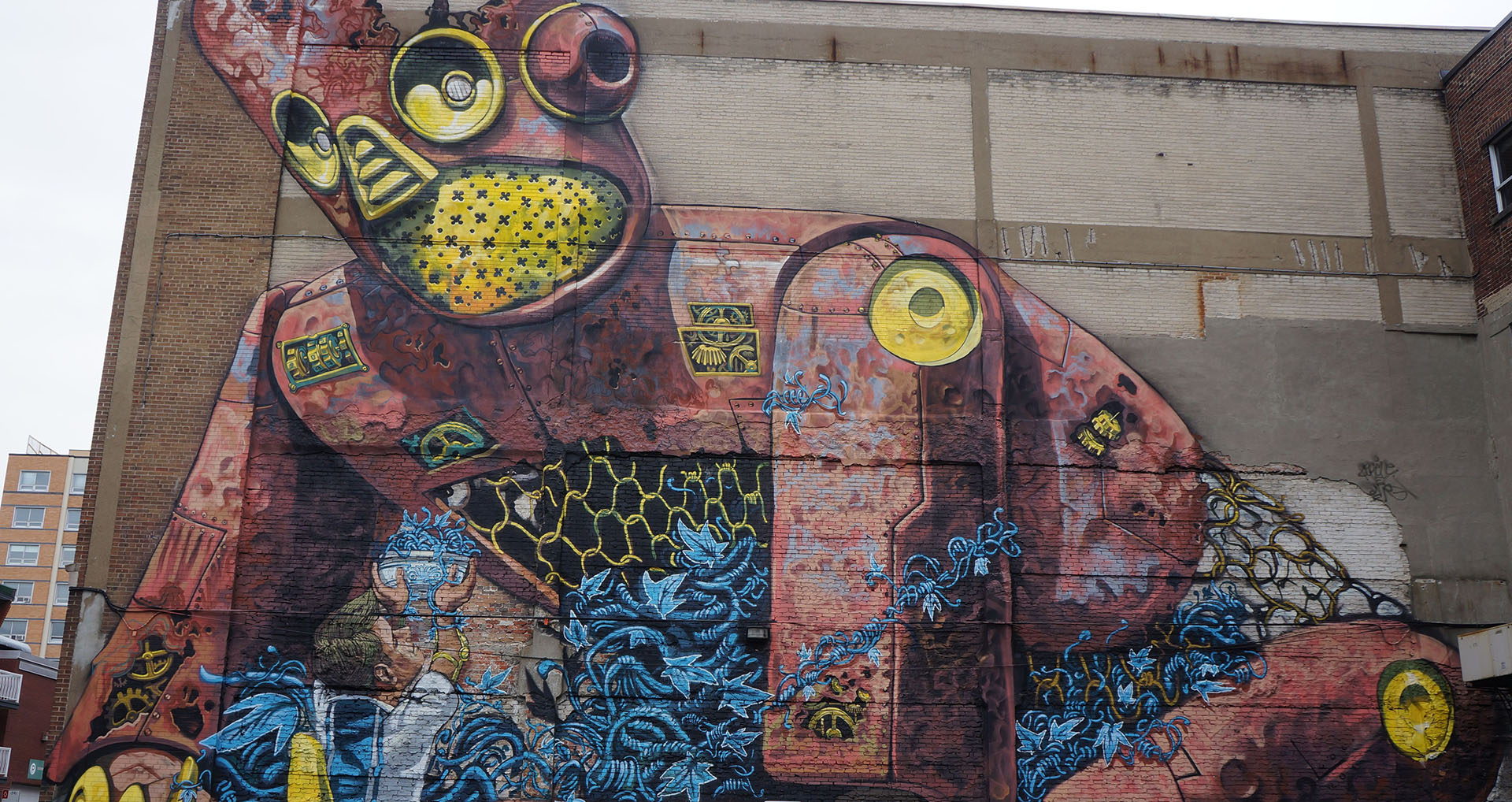 Walking down Saint Laurent on July 18th 2017, I once again noticed the saturated green and yellow of a basement Dollarama, which had beckoned me for months. What better place to start off my cost-saving art exercise? Walking down the aisles of fluorescently lit products, I'm oddly zen. Dollar stores are a testament to free trade and its downward power on consumer good prices, and one thing in the "I can't believe it's this cheap" club were paints and canvases.

Ten minutes later, I was walking out $15 lighter with everything I needed to be an artist, including a corny fabric beret. I headed home and laid out my paints in bottles, bristle-losing brushes and canvas boards. For the next 10 hours, I painted robot farmers on tiny little canvases while listening to an endless string of podcasts.

At the end of the evening, pretty entertained and amused, I had completed three pieces that looked like something done by a talented nine year old. They would go on the fridge, but nothing more. I took a picture and put them up on facebook. The next day, feeding off the encouragement of a facebook community amused by my efforts, I decided to launch into a year of painting. It was time to do this.

So over the last two years, I have painted quite a few robots, over 50, in fact, and have a decent collection of work to make a show. I painted robots for the first year as both a creative constraint and to master at least one form and answer my original question of whether this would allow me to learn to paint like a professional artist. Now I’m inviting everyone to judge whether I achieved my goal during an auction sale with opening bids of $1. This way, I can figure out the current value of my paintings (if any) and also find a home for some of them.

I wanted to add some ingredients to the usual art show recipe, so along with some great (and not so great work), the exhibition features:

While I painted, I logged hours working on each painting using a recipe card attached to the back. After painting each night, I would write in the time spent and the work completed. From this, I figured out how many hours it took to get to any milestones. Like, how long does an average painting take to complete? (9.3 hours) and how many cumulative hours until I painted something I actually liked (41 hours). Also, if I ever sold a painting, I could figure out what I was getting paid per hour. It seems to me the definition of being “professional level” at something is getting paid enough to live from your work. If it took me 100 hours to paint a $100 painting, I would be more professional picking up garbage.

For the show, the numbers have been crunched and the charts have been made. Come see the data presented on the wall including answering questions like “what having a relationship does to your painting output?”

Beyond the fickleness of social media, I decided to get reviews from a trusted source. Most people you know can’t give an honest opinion about something because honesty is scary and hard. That’s why I chose the most reliable metric I could find: A rating out of 10 from my retired step-dad from New Zealand who is, shall we say, unencumbered by Candian social norms.

For the show, along with Keith’s honest ratings and entertaining comments, I swapped out a boring title card for a full stats sheet telling you how long the piece took, when it was done and what materials cost. We’ll see whether more time translates into better work, or whether art is totally random.

Not only can you see the preliminary results of this experiment, you can also help complete the dataset by snapping up a deal on a piece of art-onomics. More than anything, I want the work to go to people who appreciate it, no matter the price. Just for coming, you’ll get $5 to spend with all proceeds going to a good cause: The Paige Saunders life improvement fund, which works tirelessly to feed and cloth one Montreal experimental painter.

Contributors
Joy Monger: The Joy Monger is a Montreal-based artist currently focused on robots but generally interested in forcing joy on the world around them.