Austin was always enamoured by his grandfather who had a bottomless well of stories. It was hard to imagine how a life could be more fully lived. Grandfather always showed the greatest interest in Austin’s own stories however fantastical they were. “Your imagination is a garden” he would say “it can grow many wonderful things if you nurture it” which was advice he followed right up to the last days of his life. When he sensed his strength leaving him, he imparted a wonderful gift to Austin. It was an old family trinket, an ancient yet elegant looking stylus with what grandfather promised said was the "power to bring images to life". He told Austin that tracing any image of a living thing, and the living essence of that thing would fill the very fibres of the page, bringing the paper to life, albeit just for a short time. This wonderful gift comforted Austin when the unbearable shortness of life weighed most heavily on his heart and his longing to spend one more summer afternoon with grandfather in the garden, founding cities in the flower beds.

Austin nurtured his imagination as grandfather had told him. So carefully did he nurture it that he was often forgetful in his day to day life. On one such occasion he left grandfather’s stylus in his shirt pocket on laundry day, only to realize as he heard the hum of the machine in the basement. That is to say, too late. Who knows what could happen if magic ink were to leak directly into clothes? Austin had never used the pen for anything but tracing. One thing was certain though and that was that Mother would be angry about leaking ink, magical or otherwise. Austin raced to the basement to see if there was time to save the situation but he managed to arrive precisely as the wash cycle ended. Peering through the glass he tried to assess the damage, but there was no time because. Alerted by the machine’s tattle tale beeping, mother arrived and politely moved Austin out of the way so she could begin removing the clothes. Austin’s worst fears were confirmed immediately. Out of the machine came his shirt with the stylus still in the pocket and a giant dark blue ink blot expanding from the pocket like a plume of steam from a kettle. Austin thought he could see a face but his mother's was just looking at him blankly. Her face was worse. He took hold of the shirt, removing the pen from the pocket and made his way upstairs to the solitude of his room to reflect, as he had many times been instructed to do, on what he had done and why it was wrong.

Mother’s anger would fade, but Austin had another problem; the shirt. Magical ink is powerful stuff and clearly this shirt presented a serious liability. Would it come to life? Most likely yes. But what would it be like? If it didn’t have the essence of another living thing as his usual tracings did, what kind of essence would it have? Austin resolved to place the shirt on a chair and wait and see. Let the shirt make the first move. And after a while it did. The shirt or “shirt” as he came to be known came springing to life with a character very much his own. Austin didn’t understand how exactly, but his curiosity was overwhelming. Shirt was fascinating. His existence broke all the rules but he didn’t care. Shirt was above the rules and he was clearly planning to stick around. Shirt knew that he was the kind of friend Austin needed, one grounded in reality. 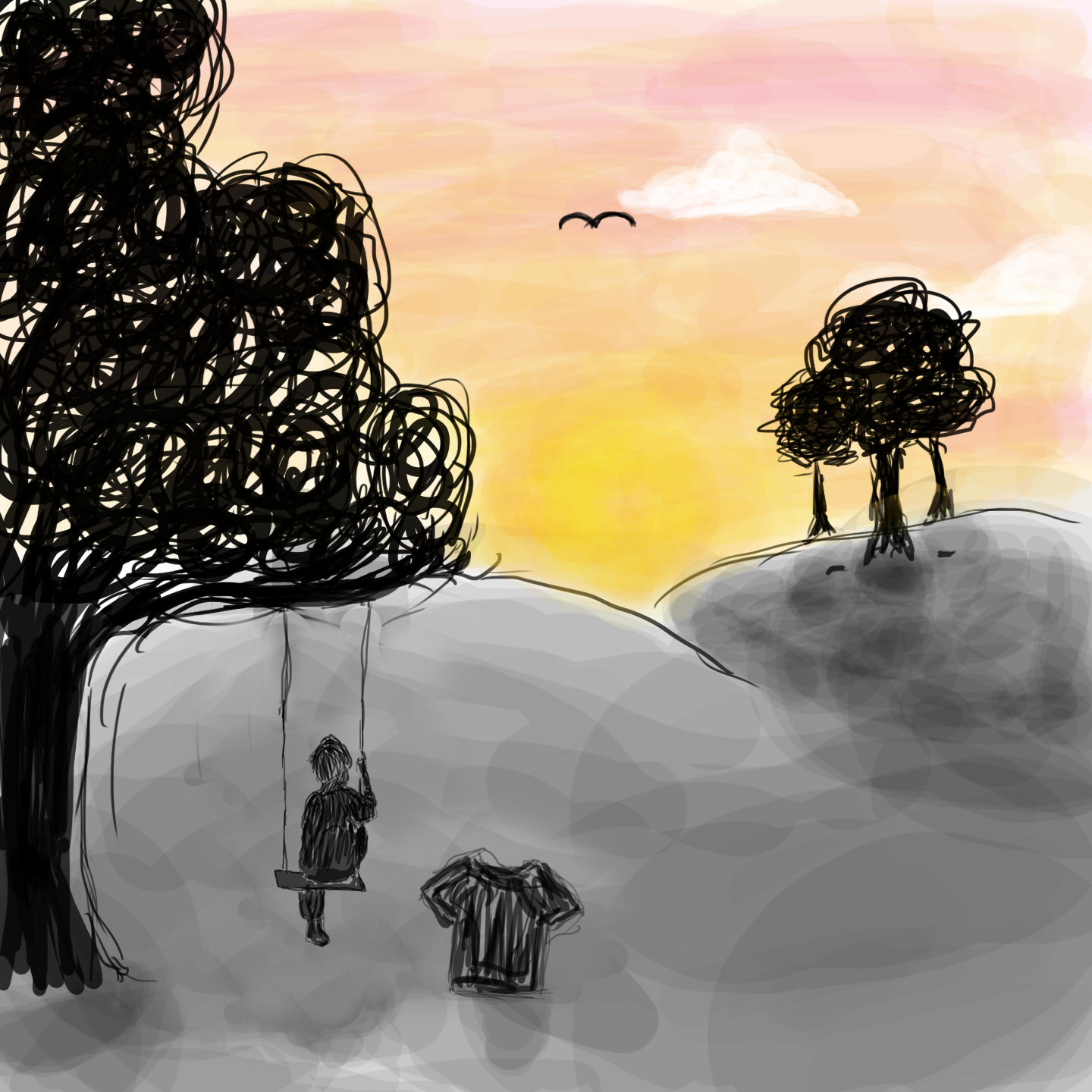 Big sister was dead. She had been dying for months but now she had finished, and was really dead. Her bed was empty. She wasn’t in the living room under her blanket with the special drinks mother made for her. She was nowhere.

The funeral was happening. Cars had been arriving all morning, people brought flowers, one person brought flowers in the shape of a violin. Everyone was quiet. Slowly people got back into their cars and drove in a long line to the little church on the busy road. Dear Sister was inside in a box on a table, in front of a stained glass window. Austin could only look at the floor. To look at the box was unthinkable.

Mother and father didn’t cry. They stared into the stained glass, beyond tears, mesmerized by the effortless rhythm of their own breathing. What a difference it makes.

After the last of the people had said sorry for no good reason for the last time. Austin was alone with Mother and Father and Shirt. He missed grandfather more than ever and held his pen tightly in his pocket. Austin wanted to trace something for them, to use his magic to comfort them as it comforted him. He took sister’s photo from the bookshelf and a napkin from his pocket. Brushing the funeral cake crumbs from the paper he began to trace the picture. The ink worked it’s mysterious magic and for a brief instant the paper folded itself into an effigy of dear sister in the throes of joy, just as she had been on the day the picture was taken. Mother and father had never had much interest in his pen or the wonderful things it could do, but this time something changed. They watched gladly as the paper danced itself gently back to lifelessness, then a fresh flood of tears came rushing uncontrollably. Mother held the fragile paper in her trembling hands, and looked at Austin lovingly. For Austin the look was like stepping into a warm bath, but it didn’t last. Sadness unmeasurable was written in her pale face, and now something else. From the place beyond sadness. Something terrible.

Dear sister’s body felt as light and fragile as that of a baby bird fallen from it’s nest. It was barely a struggle to carry her through the broken window of the funeral home and place her, as if to sleep, on blankets in the trunk of the car.

Austin was sleeping when father carried sister up to her bed. Austin would understand. Austin will be so happy to see her. She lay in the moonlight like the most beautiful china doll they ever saw, her face frozen in a gentle smile. Taking Austin’s pen from the bedside table in one hand, he gently covered sister with a sheet. With a trembling hand he traced an outline of her. Stillness filled the air as though time itself had congealed like resin. They waited breathlessly. Nothing stirred. Silence swallowed everything. Moments passed but nothing happened. Father realised that the car was still running. He backed away from sister’s bed and left the bedroom to go downstairs. The closing door clicked and Austin woke to the noise. Immediately he felt a sense that something was most terribly wrong. Horror was in the air and it brushed his exposed skin like a freezing mist. From sister’s bed there was a sound. The moving of fabric like the drawing of breath. Austin was paralyzed with fear. Something rose behind him and cast a shadow in the faint light from the street. He felt it move closer to him and begin to make a strange sound as though stroking the surface of his bedside table. Suddenly free to move he turned to see the sheet, folded into the shape of dear sister, hunched over as if in pain, vainly, desperately, trying to pick up his glass of water and drink from it. Austin felt his heart would burst. To scream was impossible. At that moment the bedroom door opened and father and mother came in. Then the scream came. What’s happening? Mother rushed towards him and took him in her arms. Everything’s ok. It’s all ok. My beautiful beautiful children it’s all ok. She reached out her arm and to Austin’s horror, brought the sheet into the embrace. Austin felt the fabric touch his skin like a hundred spiders’ legs all scuttling at once. He broke away and ran for the door but father stopped him. He found his lungs again and screamed. No sooner had the sound escaped than he felt father’s hand cover on his mouth with a strength he’d never felt. He tried to wriggle free but father held him effortlessly. Madness was in both of their faces. 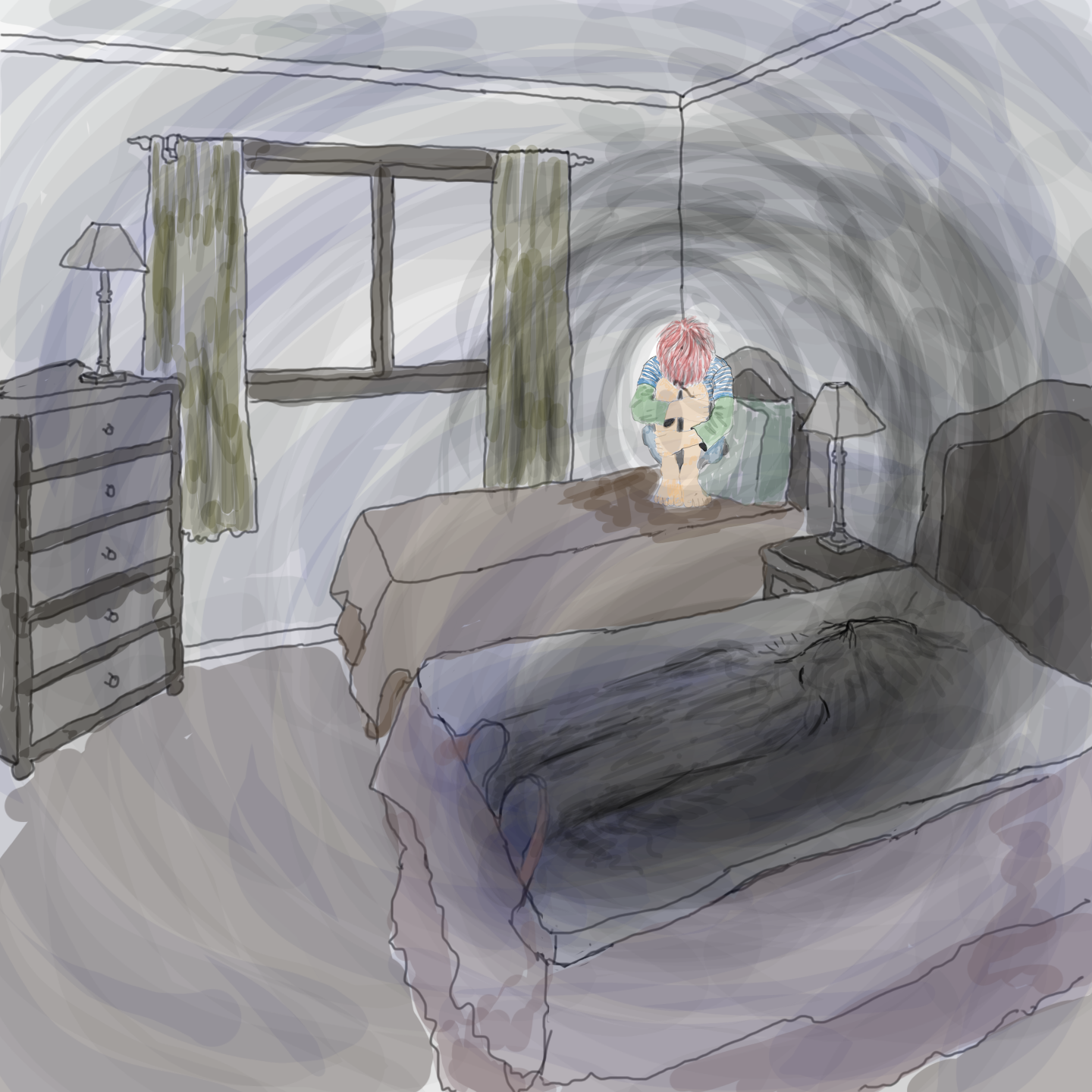 The doors were locked day and night. Twice a policeman came to the house and Austin was locked in the bedroom where air fresheners now hung everywhere. Mother and father came to the bedroom twice a day to trace what was left of dear sister. Each time the tracing would rise and limp around the room. Mother would sometimes carry one downstairs to watch television or into the garden to sit in the swing, but they were always in pain, always dying faster and faster. Sometimes father made Austin food but most of the time it was Shirt who came up with the goods. Shirt knew where the best snacks were and he knew how to forget about being hungry when the snacks ran out. After dark, shirt would climb over Austin’s shoulders and button himself up. Here he would stay until morning and when sleep was impossible, they would share stories about the far future and other worlds where cities were grown in enormous trees and people could exchange memories through touch. One night Austin and shirt were woken by flashing blue and red lights outside the house and voices in the kitchen. Mother was there, speaking loudly and angrily. Father was there too, speaking calmly to mother. There were lot of heavy footsteps that sounded like lots of different people. One of them started to climb the stairs. Mother began to scream. The door opened and a man with a briefcase stood in the doorway. He looked around the room, first at Austin, then at sister. His face didn’t change as he looked back at Austin and beckoned to him. Come with me Austin we’re going to go outside and talk. There’s nothing to be afraid of.

Of all the children at the centre, Austin was the most outgoing. Somewhere inside him was a bubble full of fear and doubt but it was deep down now, and he knew when it was moving or making trouble. In the faces of the new children that arrived he would sometimes see written the worst of his memories. At first this filled him with fear and brought floods of tears but shirt was with him, and shirt always knew the smart thing to do. In the time they’d spent together, shirt explained the magic of the ink to Austin who practised with the pen all the time, drawing ever more beautiful things for himself and the other children. Sometimes, when one of the other children would wake in the night, caught off guard by a bad memory, Austin would sit with him and they would draw together until they both forgot their fears and fell asleep.

Contributors
Joy Monger: The Joy Monger is a Montreal-based artist currently focused on robots but generally interested in forcing joy on the world around them.