A couple of years ago I laid into the Canadian banking system for being the worst preventable thing to happen to Canada since the Atlantic fisheries collapse. Why do we have to pay banks to hold onto our money? Why do we have to pay to take it out? Why does everything require phone calls, signed letters and faxes? Why are their interest rates on borrowing so high, and their interest on savings so low? Why can't we just send money to other bank accounts? Why can’t we add a description to transactions so we know what they are? In short, why is banking with Canada's ridiculously profitable banks such a hostile experience? I had hoped that legal reforms on credit unions could do something about this but I never really talked about the Canadian fintech world who have now delivered the answer to my long unanswered prayers.

For the last couple of years I've been using Koho as my primary account, going as far as to direct my paycheque to their beta software before I had even received my Koho card in the mail. I thought I'd give a quick roundup of the experience so far.

It's pretty easy to sign up for Koho (You can even signup in Quebec now, the Hawaii of Canada) you can download their app, do their very basic signup flow, and you don't have to wait to get started. 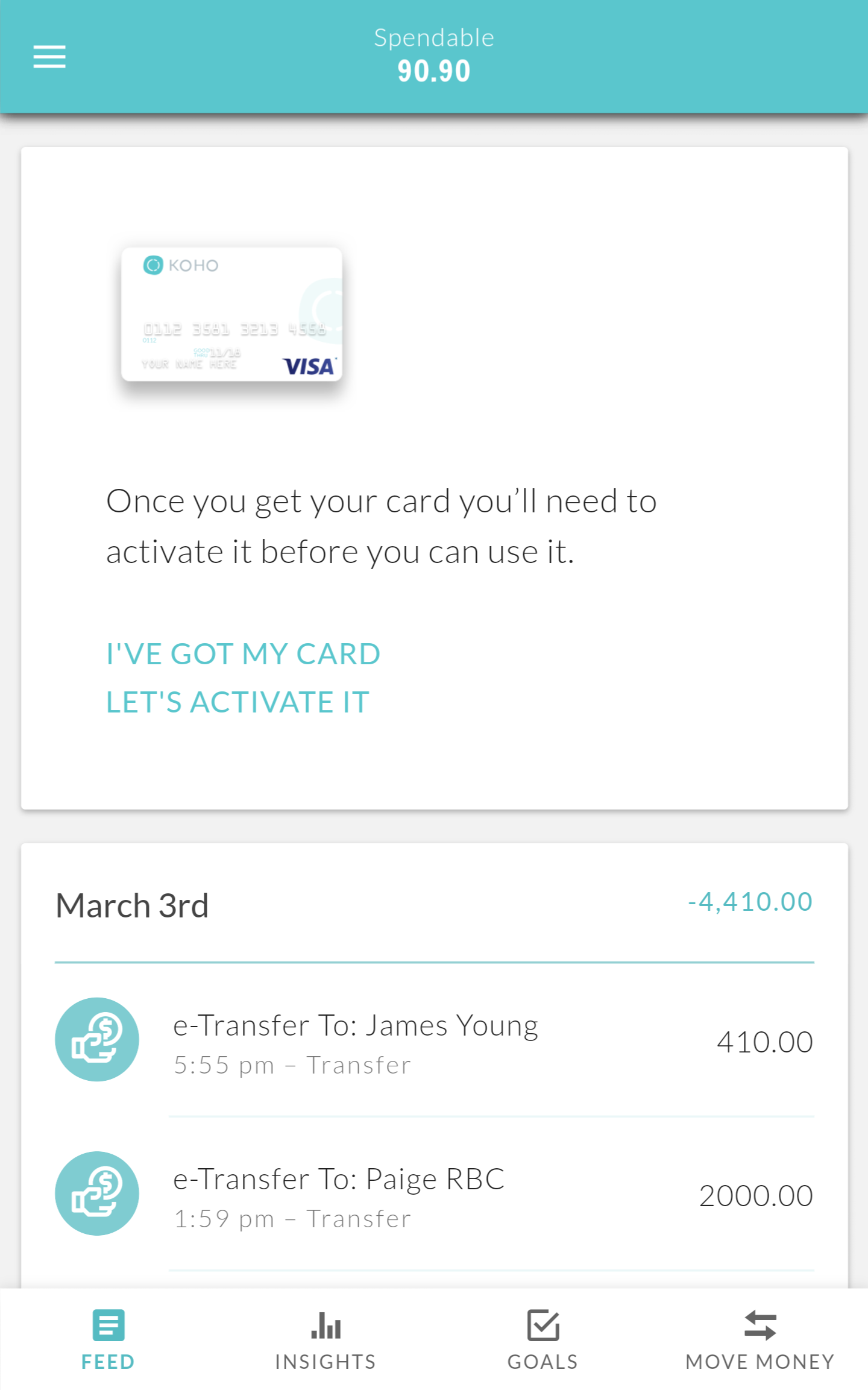 When you sign in to the app it'll ask you to activate the card. 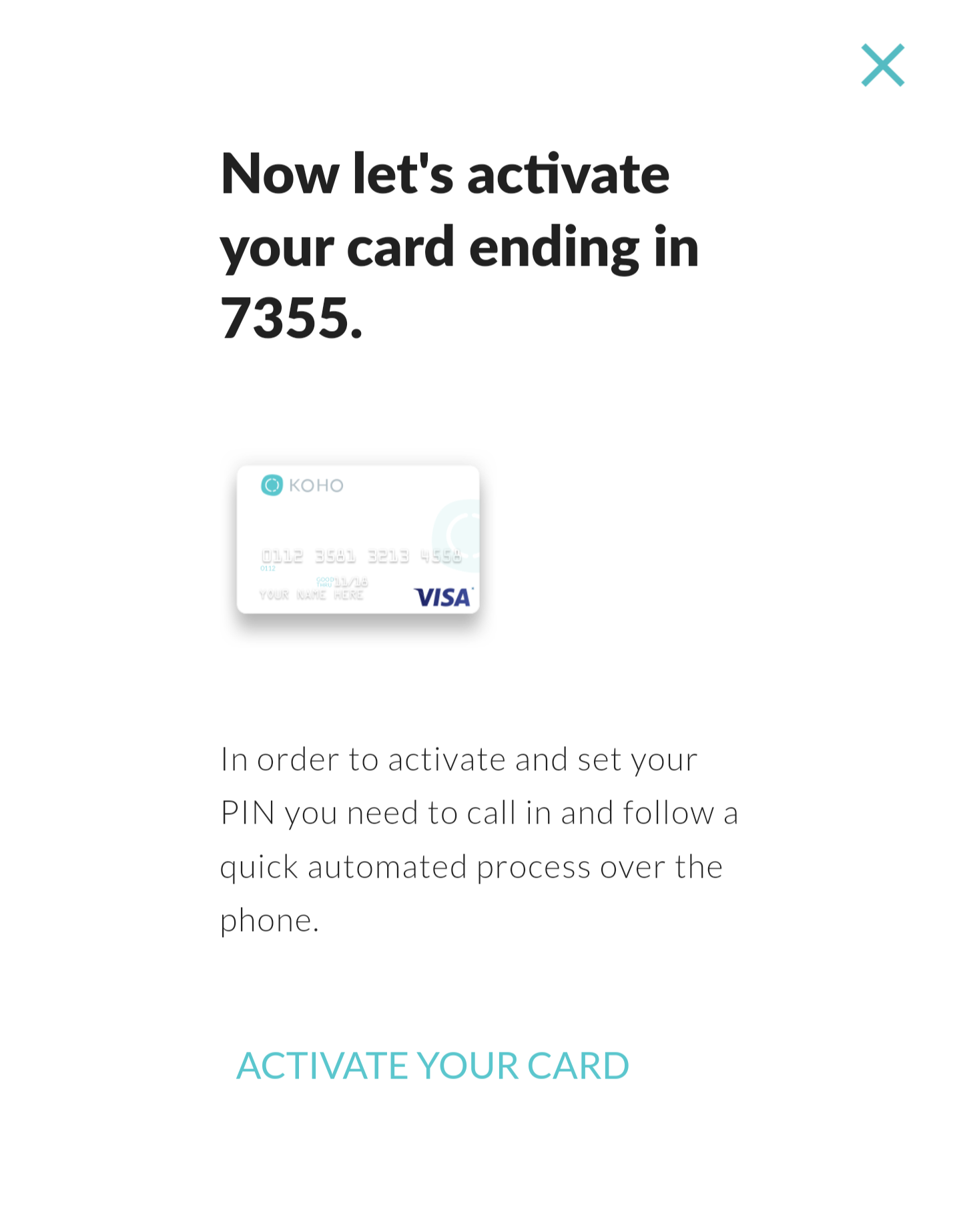 You can put money into Koho by connecting your bank account, depositing your paycheque, or doing an e-Transfer. 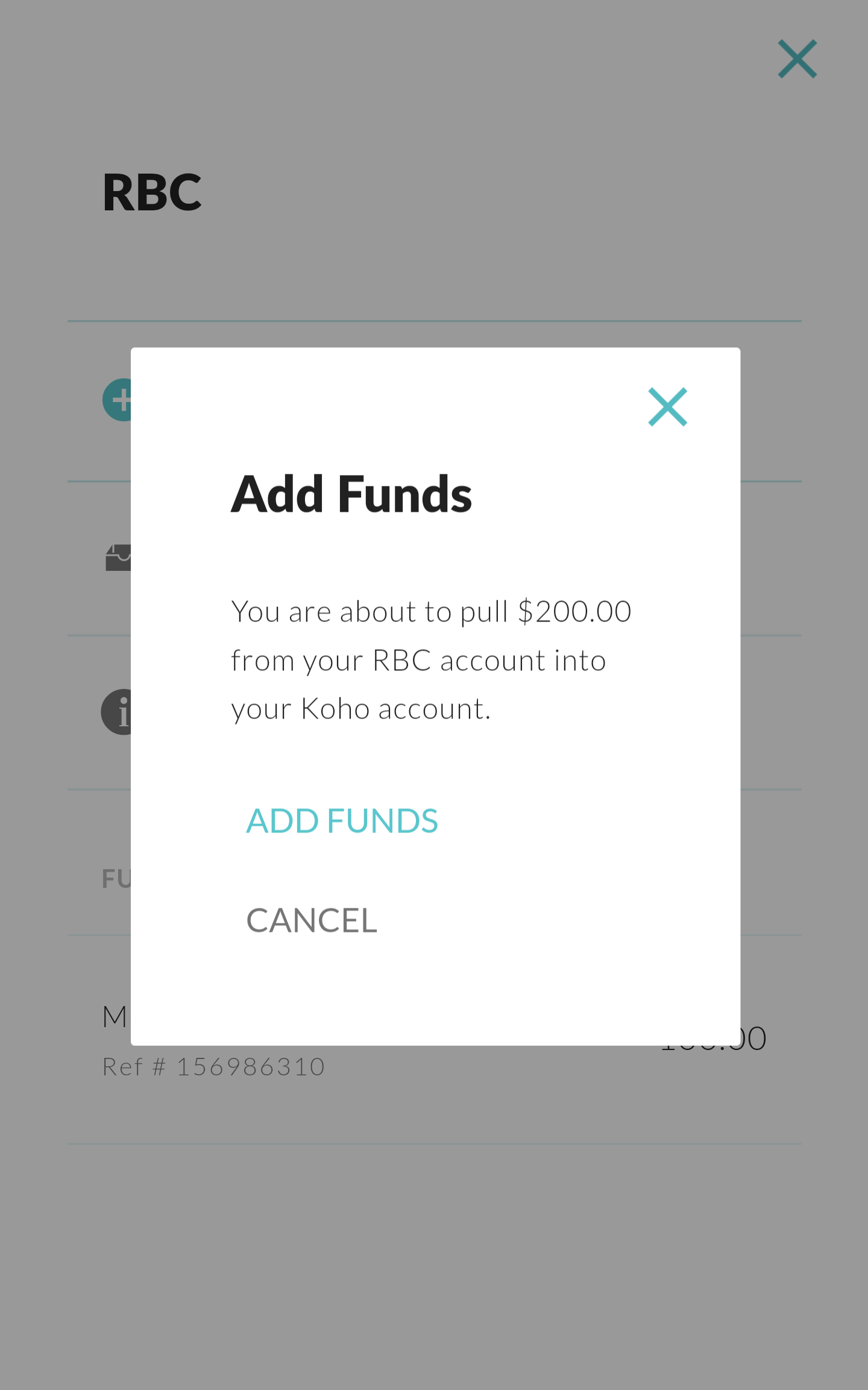 As a tech company the app is a superior experience to any existing bank or credit union app that I've used. The app is hooked into the fingerprint reader on my phone

so I can unlock it with a touch and get straight in. 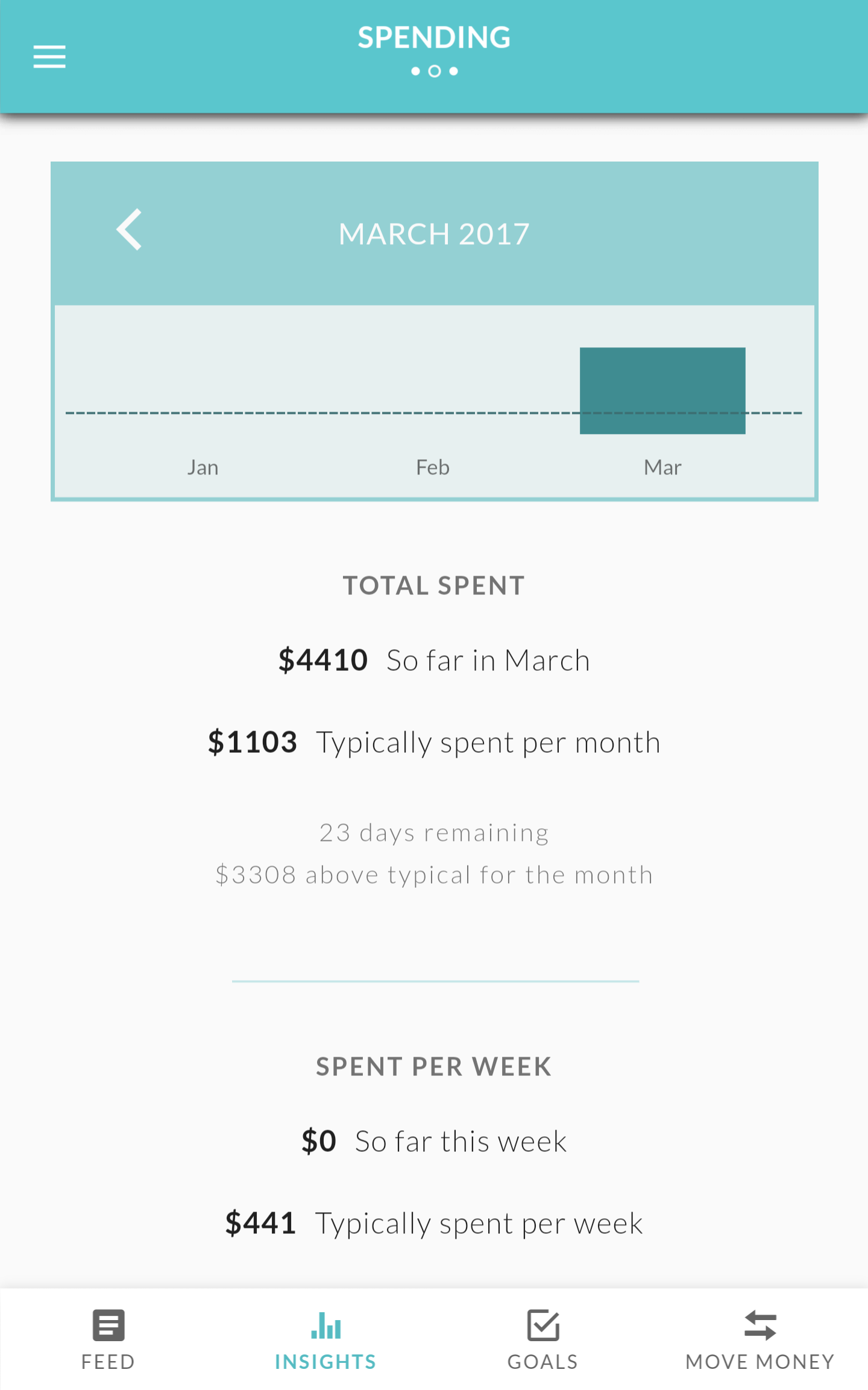 The interface is super simple, it gives you pause to reflect on how simple a bank can be for a consumer. 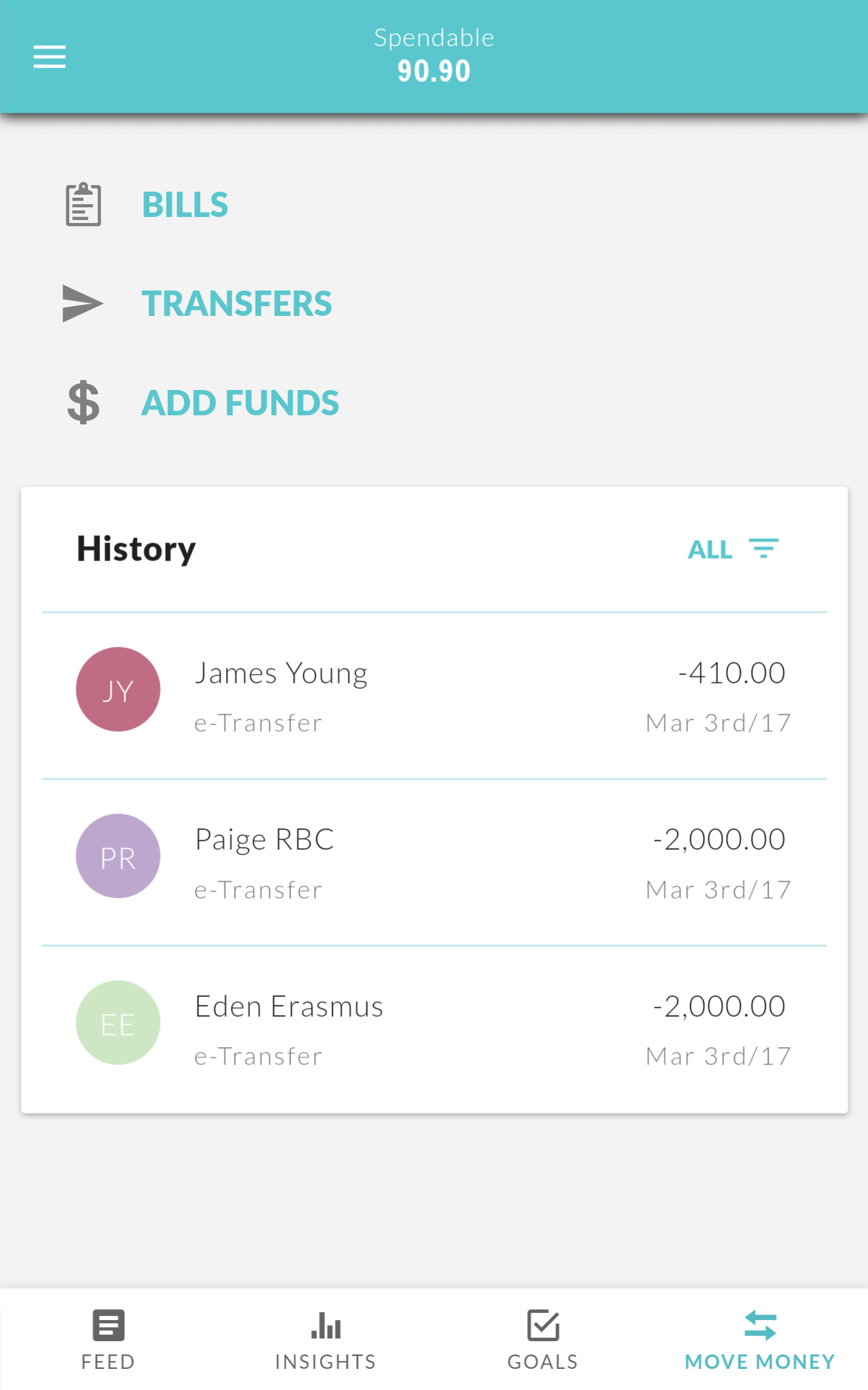 Because Koho aren't trying to sell you insurance, mortgages and credit cards it's a simple matter of checking your balance and paying people. Incidentally whenever I've dug around on these issues I've found that the best insurance, mortgage or credit card was not the one with my existing bank so I don't miss those features at all. 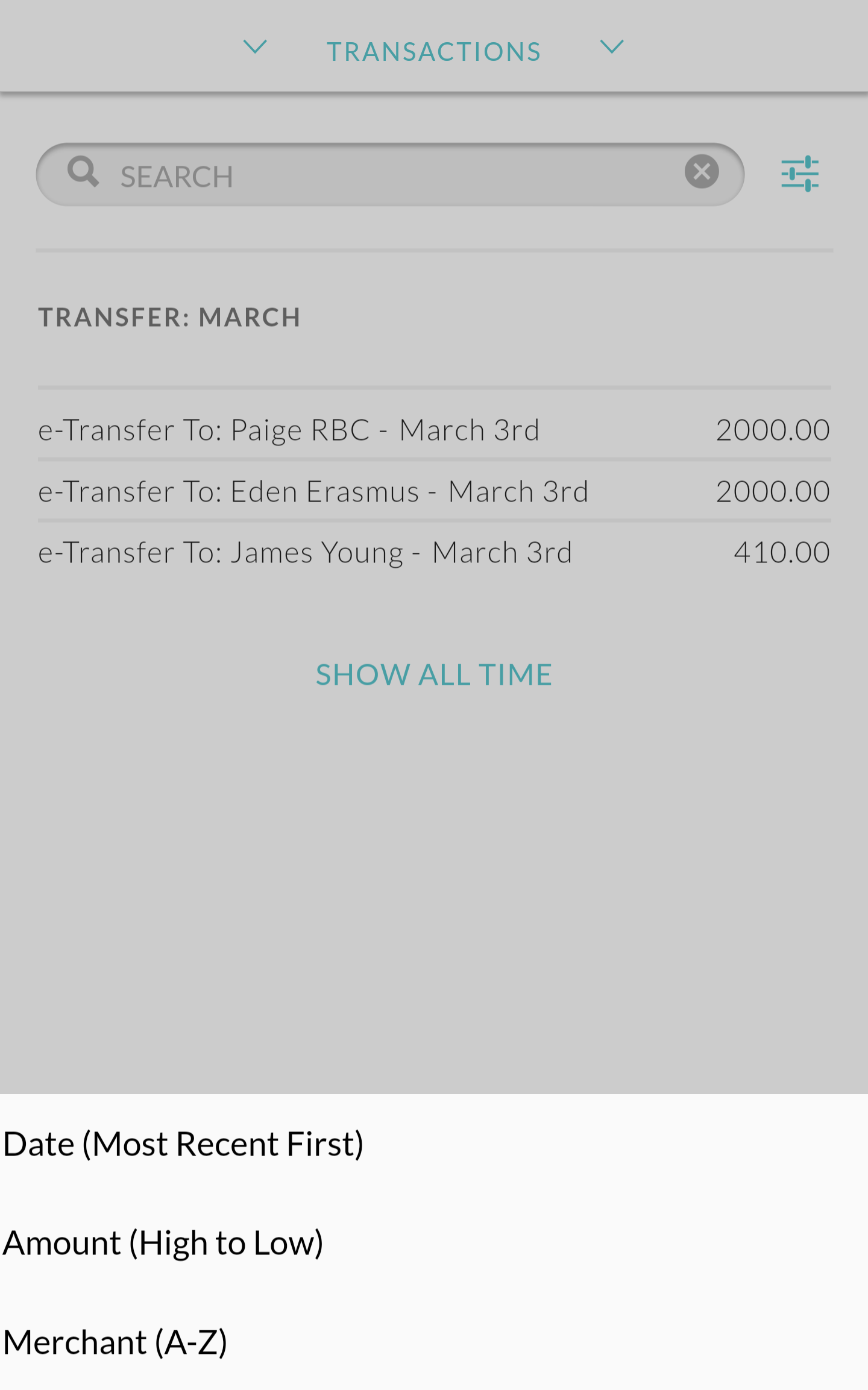 and summarizes your month which has already reminded me of a few recurring payments for things I really don’t need and allowed me to cancel them. 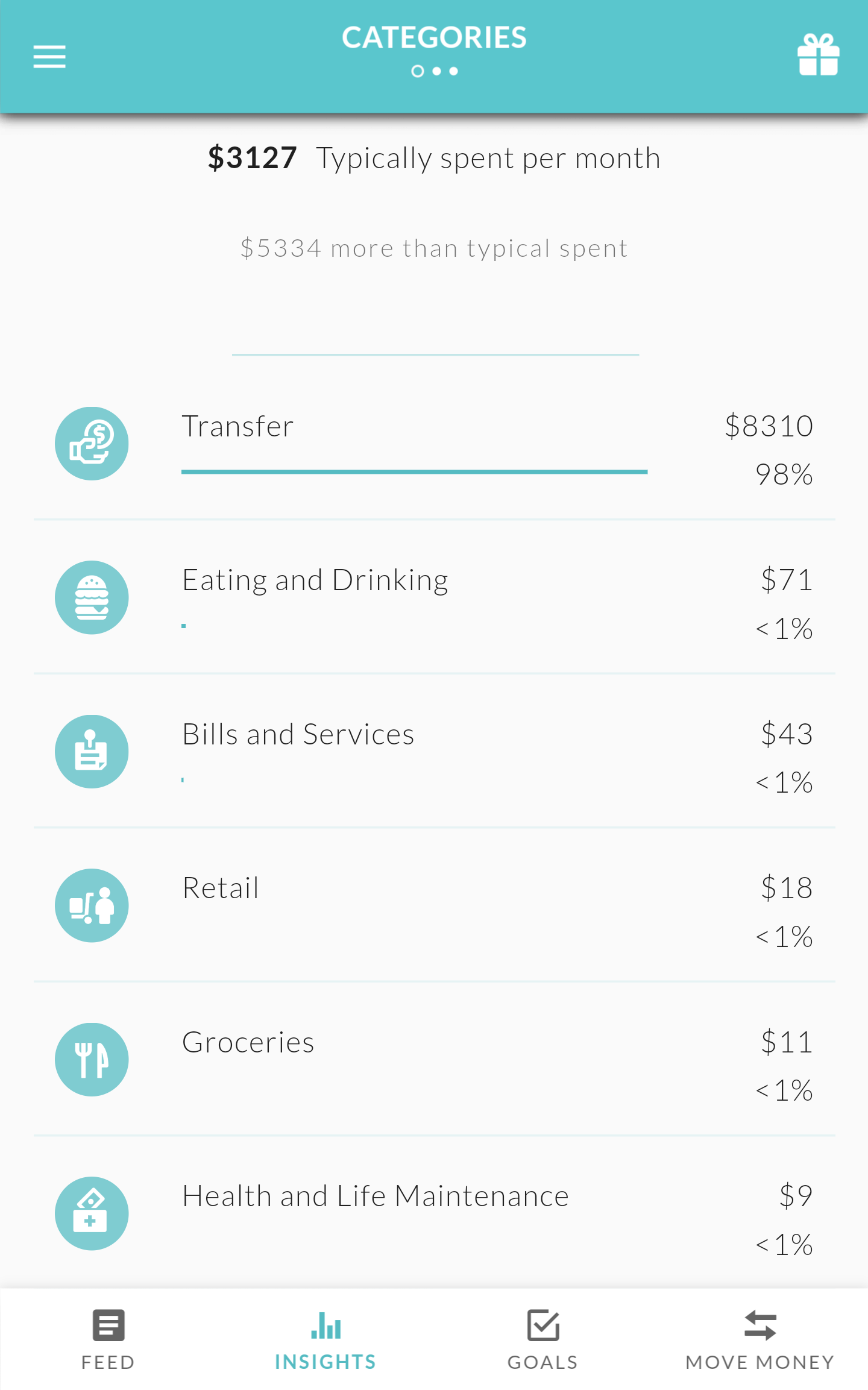 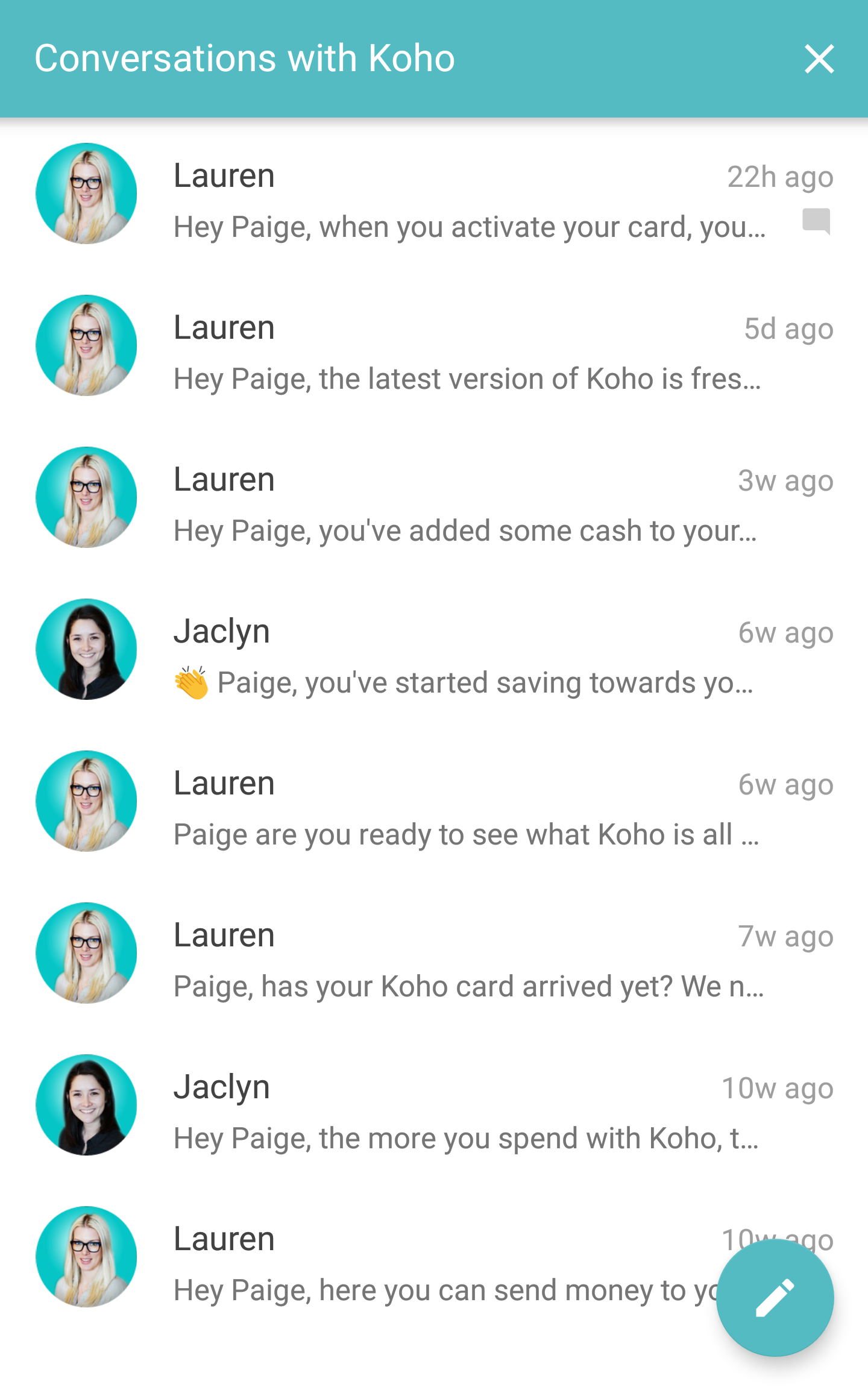 to support you with both banking and yoga mat purchases. I haven't really needed to engage with them too much but last month Hotwire messed up and charged my Koho card without actually giving me the actual hotel booking. They took care of getting the refund for me and figured out that it was an issue with my post code being on the card, which they updated for me right there in the app. 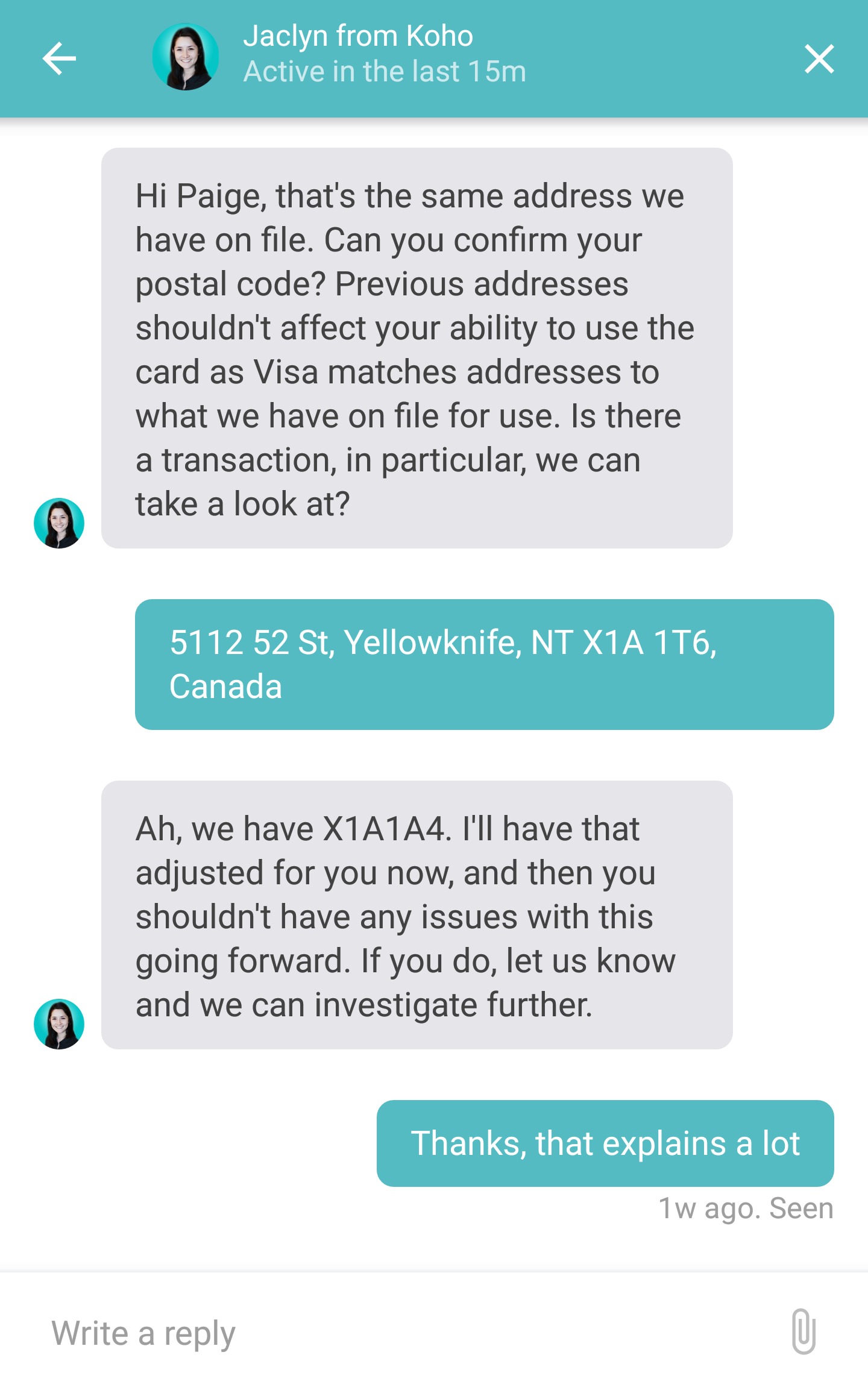 . They have also mailed out replacement cards when I lost one with a few lines in a message.

The best thing about the support is I especially like that the conversation is one central spot, it's so annoying to get all these emails where a new person or new department introduces themselves in the banks hard to read secure email systems. A customer doesn't care about forging a relationship with Sally then John then Ben as different shifts start and end one after another. Koho usually sorts it out with one (empowered) point of contact which I have to believe is is nicer for everyone.

Keeping with the modern approach Koho have their tech ticketing built around Trello and Jira which is the same system that a lot of open source projects use. If you have an issue like who wondered when chip cards will come out you can easily see other people with the same issue which holds the developers publically accountable to address it.

A nicely assembled package arrived with a Koho Visa debit card, it's not worthy of an unboxing video but it's a decent effort. The cards now have EMV (A Chip) but back when I signed up in 2017 only had the magnetic strip. The visa does mean you can pay anywhere that visa is accepted though or get money out of a number of ATM machines without a fee.

I can pay my property tax using the same directory that seems to be circulated to incumbent banks. 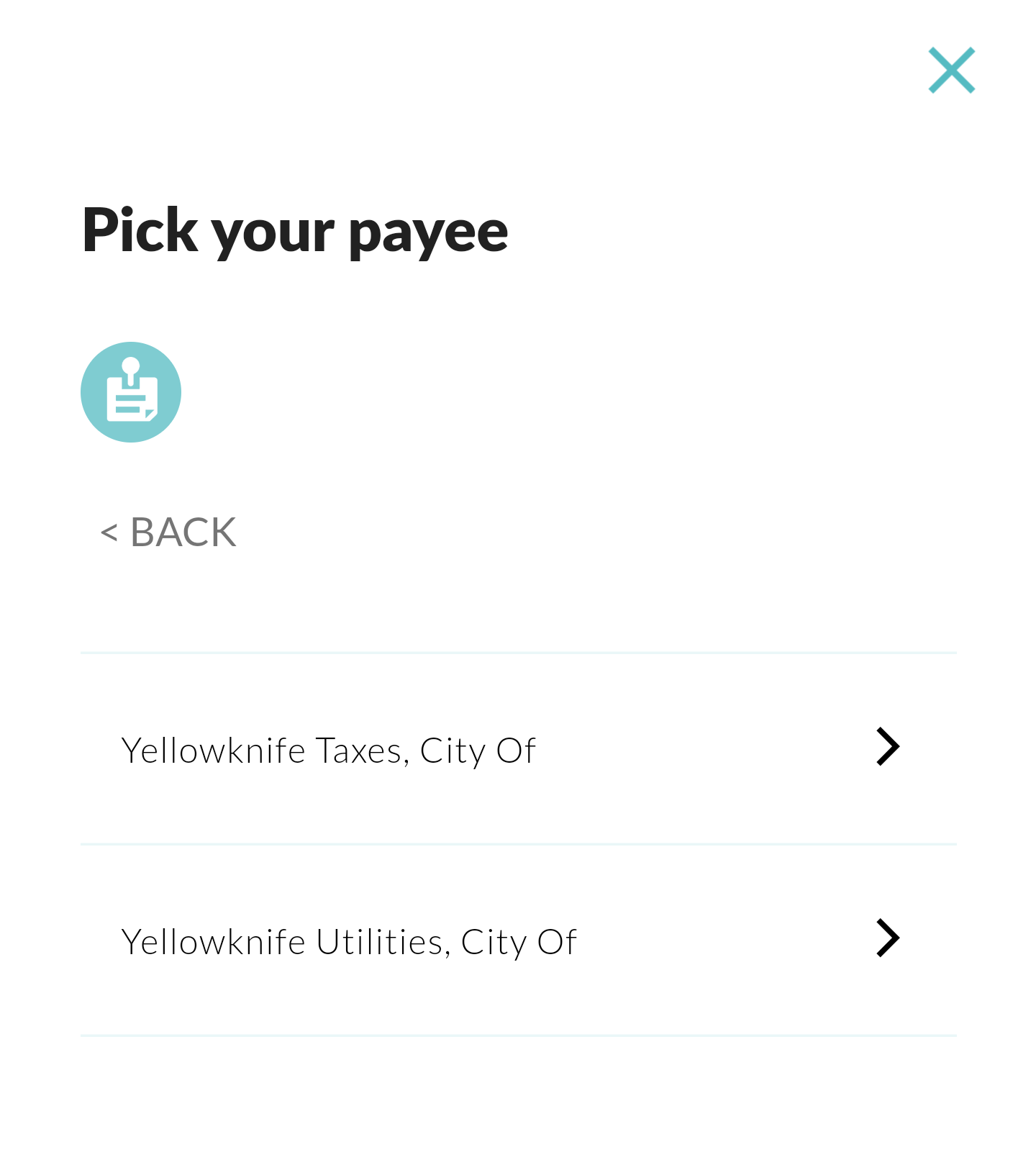 If I had one criticism it's that the search isn't as smart as it could be for a fintech startup, for example in 2017 the City of Yellowknife was in the bill payee database as "YK, City of" and searching for "Yellowknife" wouldn't find it 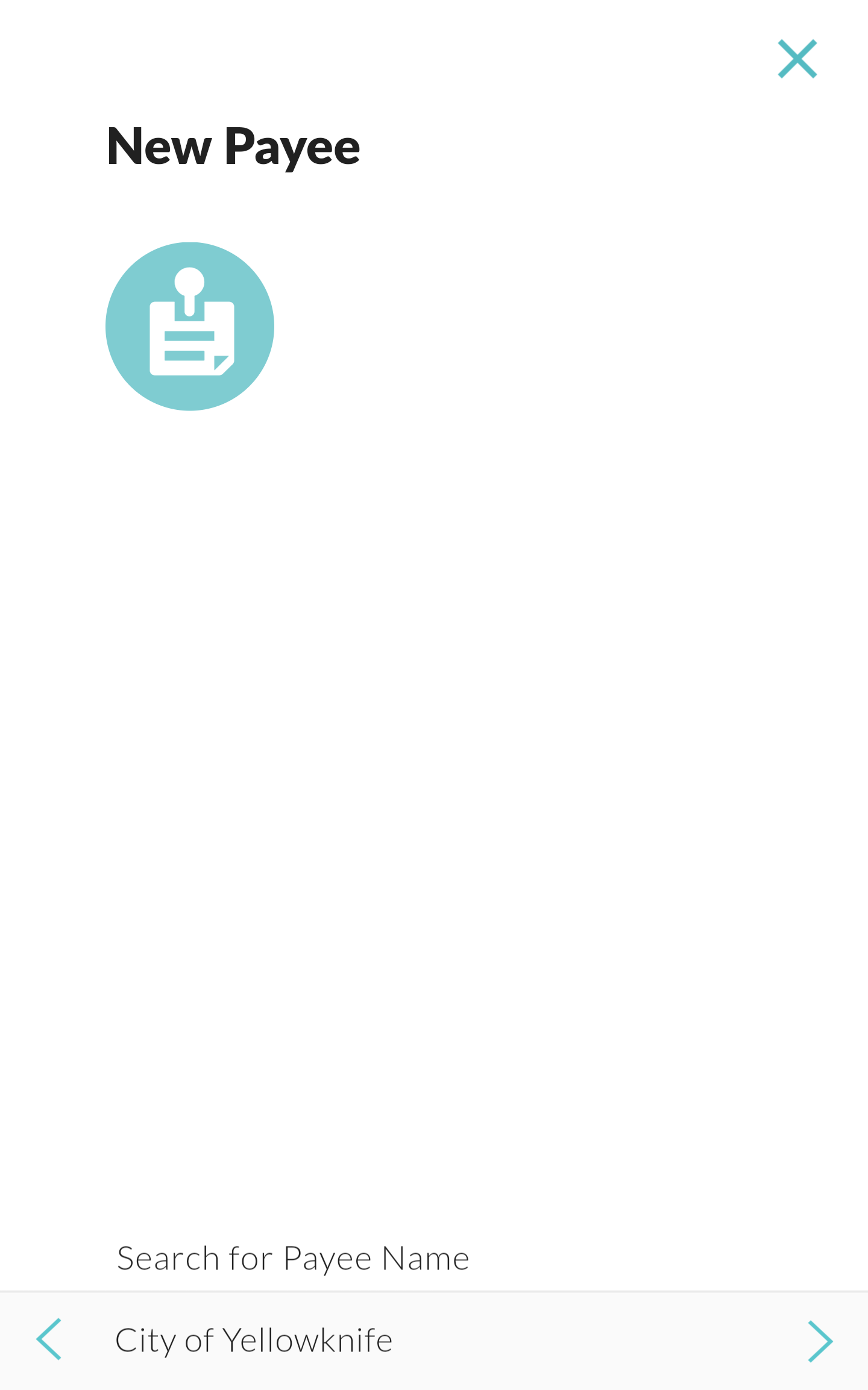 which a smarter software layer could cross reference a database of Canadian acronyms, WTF Koho, (Why The Failure).

It's always been fairly easy (as in like the rest of the world) to send money to other people at your bank, with Koho it's even easier because you only need their email address for both the internal and etransfer system. Sadly none of my friends are as cool and cutting edge as me but the e-Transfer limit is super high by default which let me send someone 3k with no issues.

I had a panicked moment because e-Transfers were missing on launch and having all my money in my Koho account meant I couldn't pay my rent. I checked the Jira tickets where a lot of other people had raised the issue which was labeled "coming soon". But not three days later they added the feature. 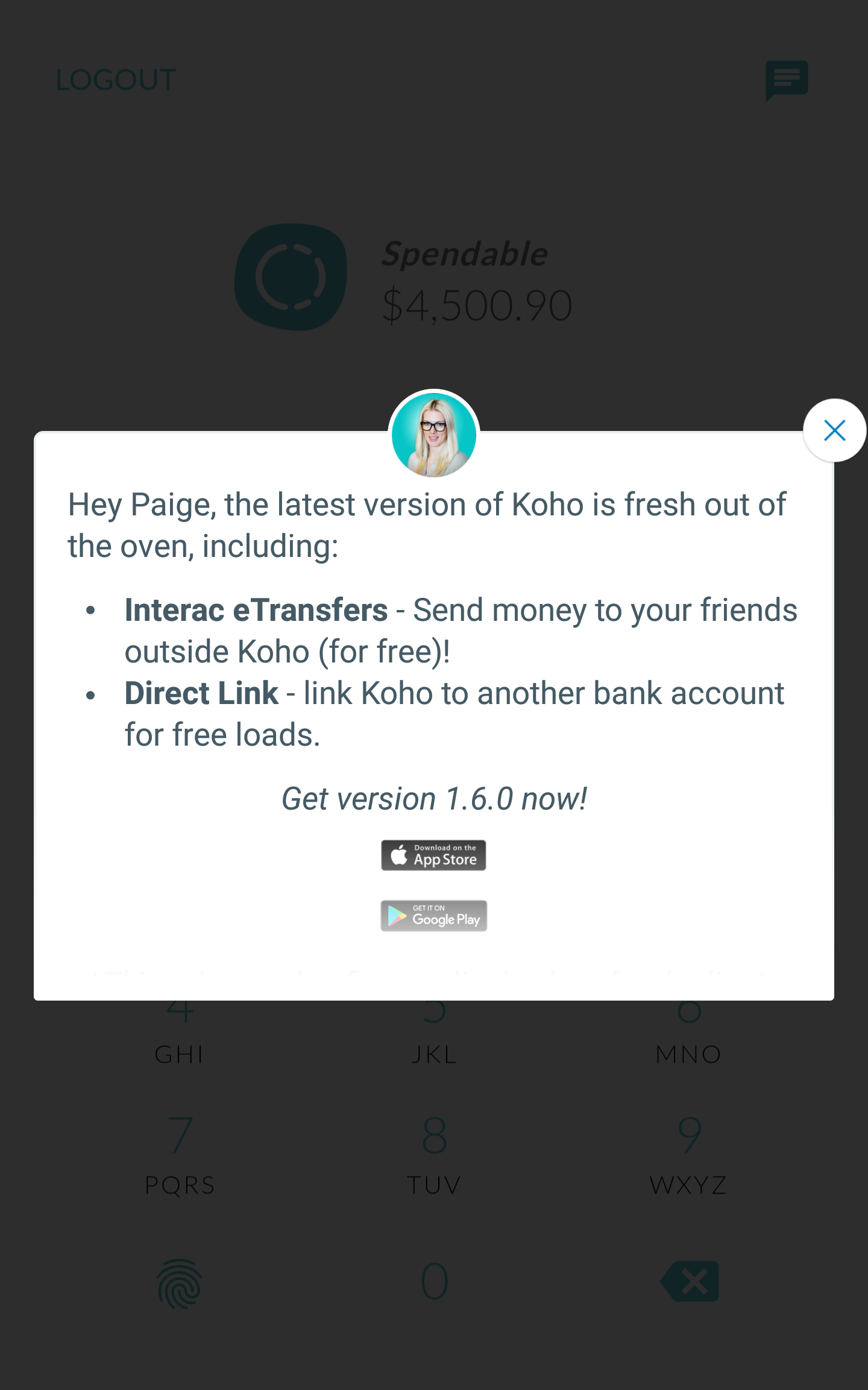 When was the last time you had a gripe with a Canadian Bank and it was fixed before the end of the week without saying anything? Their developers obviously fast tracked adding the feature. Bravo.

The app has a savings feature that is nice. 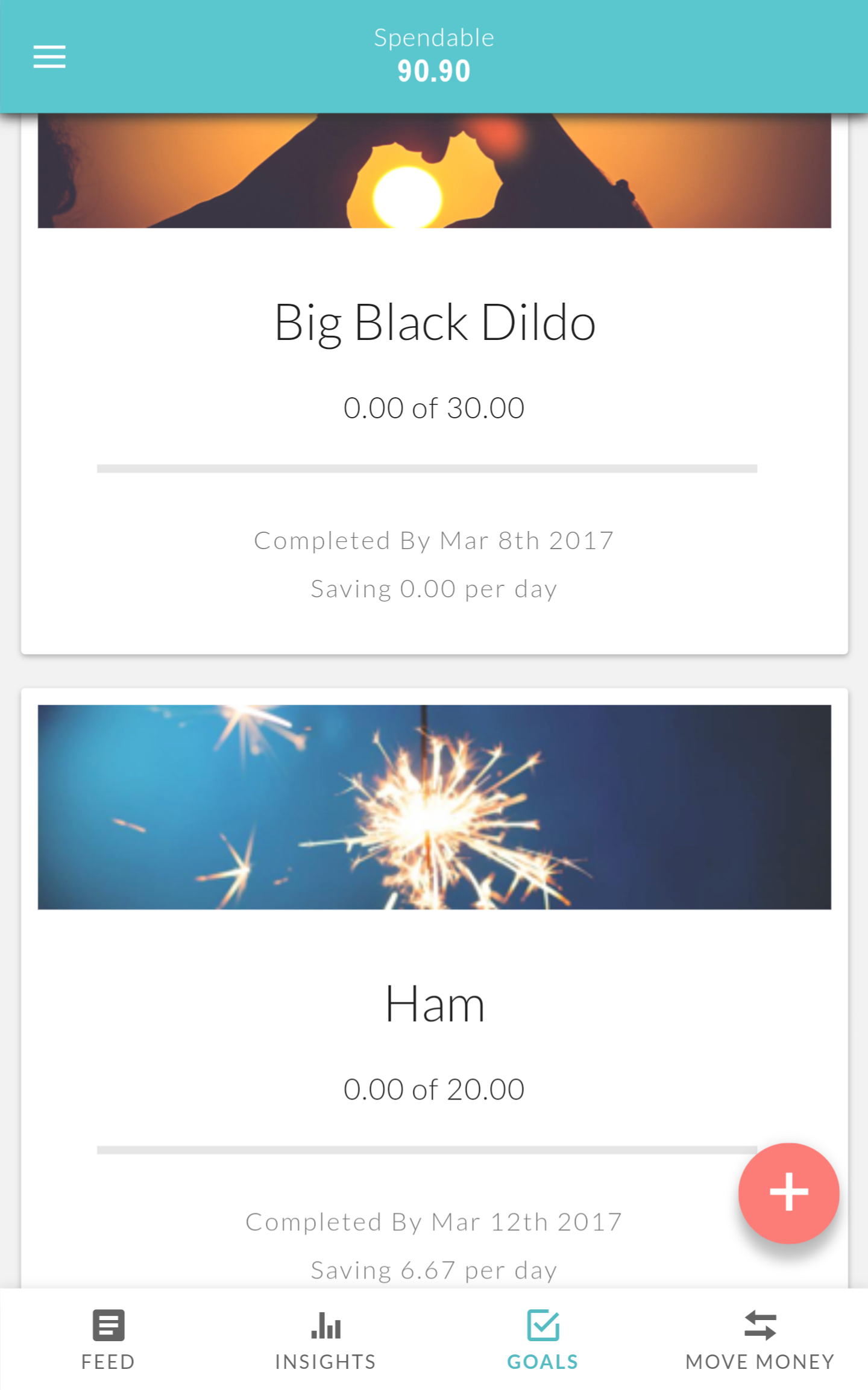 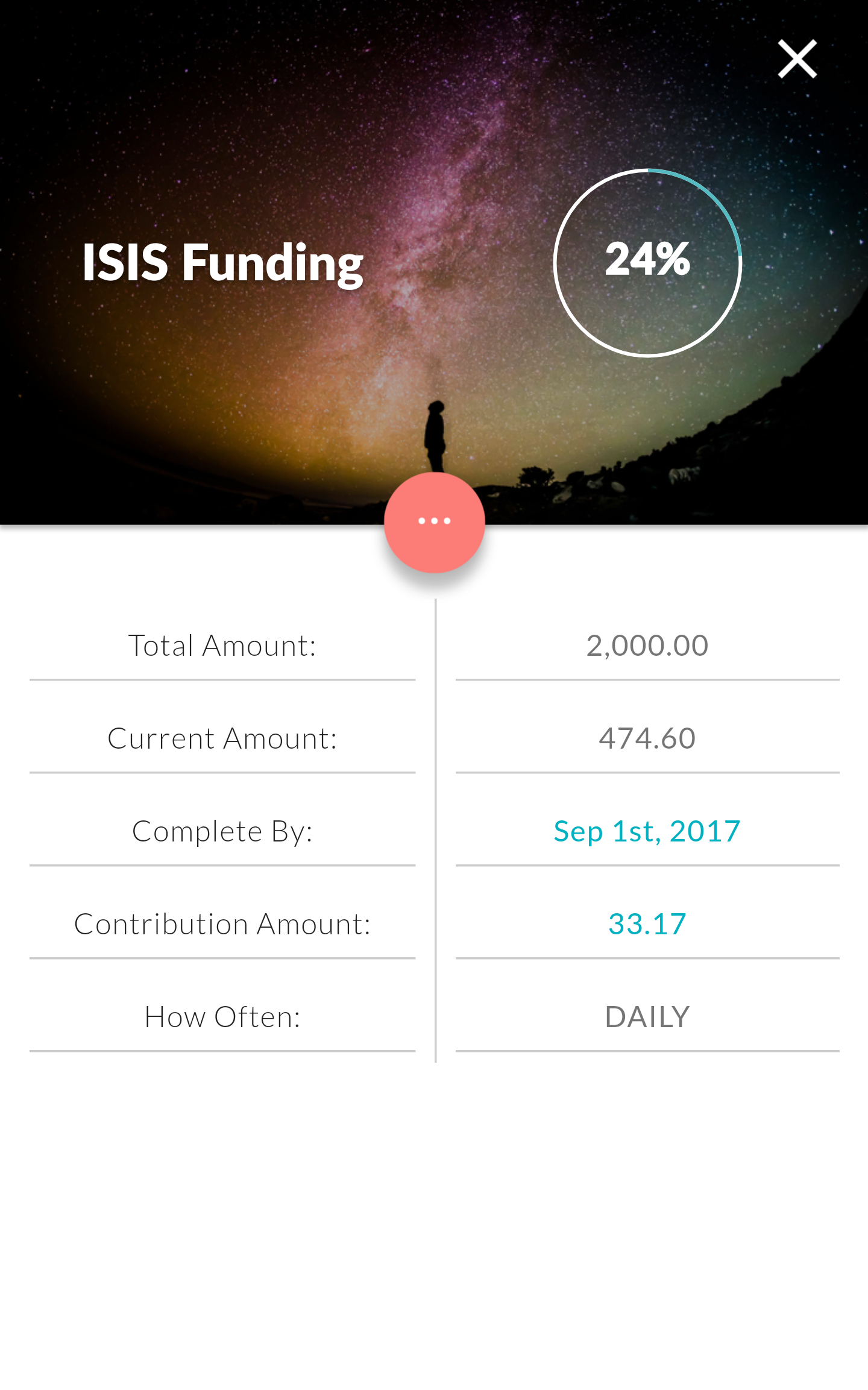 which is locked off from you but if you cancel the goal the money is freed back up immediately. You can also set-aside a certain amount from each transaction. I actually wish they would let you make it a little harder to cancel a goal, it would be awesome if they made use of the GPS to require you to visit the gym or neglected realative before the cancelation went through. Maybe it could be setup so another person has to approve of the cancelation? You also have to choose from one of a limited number of inspirational savings goal images including a "you can do it" sunrise and "good for you" meadows. 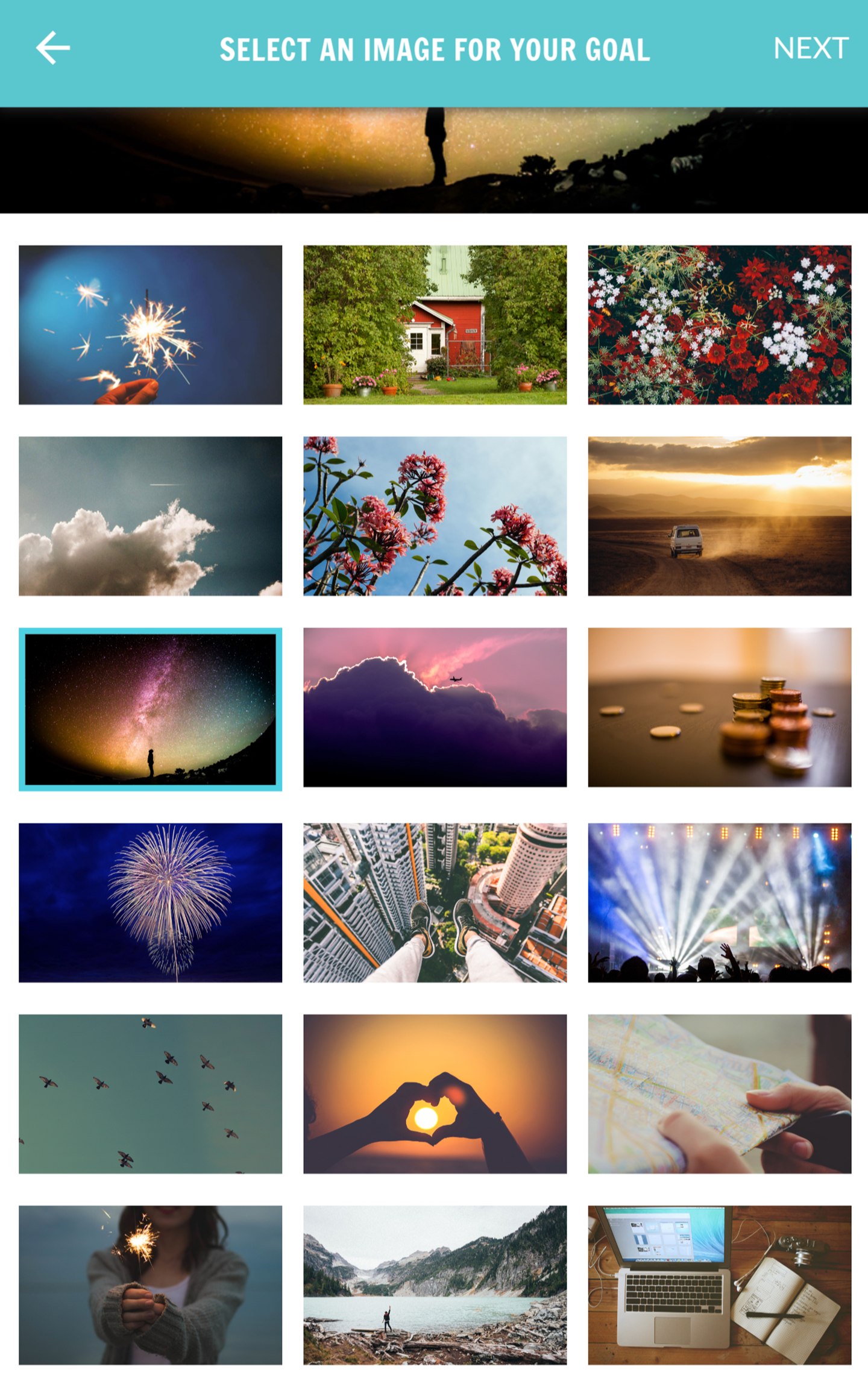 In the last couple of years they have added Joint Accounts, Virtual Cards (To pay online), More Analytics, Premium Cards, Apple Pay (As welll as pending Google Pay) and a lot of partnership integration. Without having the traditional bank offerings like Credit Cards and Mortgages on top of fees, it's hard to see where the profit comes from at this point. If they could figure out how to get really good at helping people save and invest their money that would be a nice way to stay "the good guys"

I think that the only two people who directed their paycheque into Koho on day one are probably me and the founders mum. Despite making an early adopter move that I was certain I would be punished for it's been good so far and I've been pleasantly surprised. If you're a millennial who doesn't have a mortgage this product is made for you. It'll save you money in fees and giving you the power of a credit card without the credit will save you from yourself, also by the time you're ready to use more traditional financial instruments there's a pretty good chance there'll be other options for you that are better than the porridge being served by the big five.

As I moved across to Koho I decided to close down my existing bank accounts and had the opposite experience. Signed letters, visits to branches, multiple phone calls and emails. It felt like being in the middle or a divorce from an arranged marriage while on the honeymoon with my dream partner. As I worked through the RBC "customer retention" flow chart I mutter out of the corner of my mouth "This is why you'll never see me again" and feel happy that Canada is finally being given a shot at banking happiness even if it's not perfect.

If you want to try out Koho it's free and they recently added a referral program. If you use my code (VKWEI426) you can get an extra 1% cashback, apparently the bank of SOS gets thrown a couple of bucks too. Cha-ching.