Getting this out of the way up front: I’ve been managing a cryptocurrency index fund since the start of the year for a non-profit which has made a substantial return. (Aside for the non-investor, index funds own every available investment in a market -- in this case, cryptocurrencies -- and rise and fall along with the market.)  I’ve owned bitcoin on and off since 2013 and (fruitlessly) mined it on my low-spec computers. So it might surprise that I also don’t think I know what I’m talking about.

Starting in the early ‘90s, a lot of smart futurists and forward-thinking people told anyone who would listen that “The internet, it’s going to change the world!” By the end of the decade, their friends had heard a lot about it at dinner parties and the era’s TED Talk equivalents. Some of them had signed up with AOL and started to send emails, some of them had realized they could download pictures of Pamela Anderson and not pay for them. Eventually, people started to agree the tools showed value, maybe not “world changing,” but definitely better than a fax machine. Those people who saw this value and had money also opened their cheque books and started investing in businesses doing “internet things” or “e-commerce.” Then finance and economics took over. What happens when 1,000 people put $10,000 into a market? It grows by $10,000,000. More importantly, those people who have invested suddenly have way more money collectively... on paper. Other people start to hear about these returns and throw their money in, as well. It’s hard not to brag when you successfully picked a winner: I just did as much in my opening paragraph!

Let’s call this exploding market the NASDAQ, and let’s conveniently set a date of reflection for the average ‘90s investor as March 10, 2000. A wave of investment in technology had made the market the second largest in the world and a lot of people became very wealthy. Investors were, at first, knowledgeable people, then the hounds working for professional investors, and then finally regular people with a bank account and a willingness to fill out paperwork. However, over the next two years the NASDAQ deflated in what was to become known as the “dot com bubble.” The profit-to-equity ratio wasn’t high enough to maintain that price. Put simply, not enough people wanted to pay for and use the shit the companies were making to justify what they were priced at. 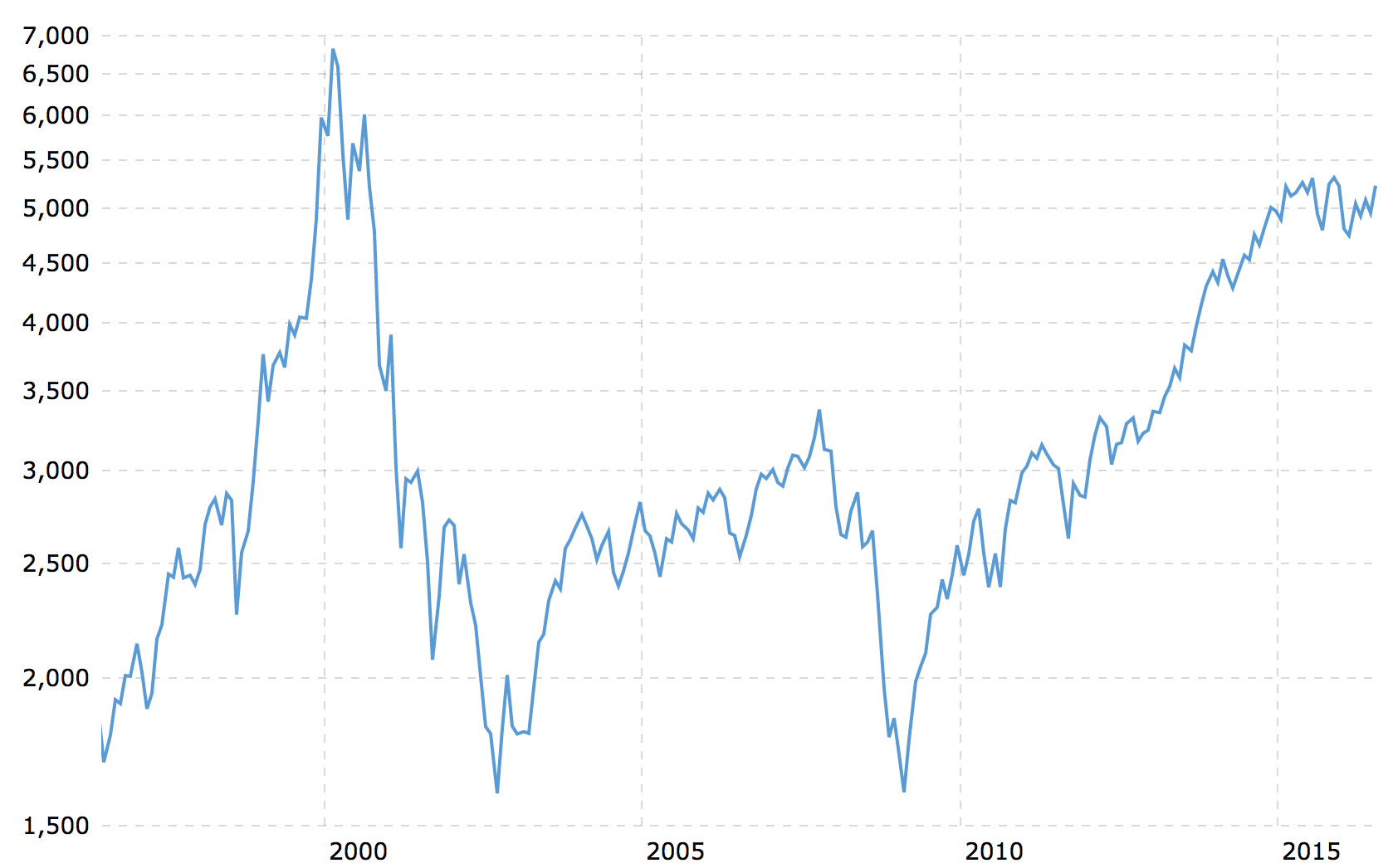 It took the NASDAQ a generation to recover

Those who don’t learn from history are doomed to repeat it, and with a generation between now and 2000, we are ready for another investment lesson. Do you know when the largest company in the Nasdaq Index (Microsoft) recovered its losses in share price? It was October. This October. October 2017. All this is to say that cryptocurrencies have created a very similar bubble market with the same mistakes present.

There Is Something There

If you want to know how the blockchain and bitcoin work this video is the best I’ve found. I’ll also have a go at explaining it in a future article, but it basically allows people to securely and anonymously store a ledger of information without any single person being a point of failure. That ledger is most obviously applied to money, but there is also a short list of other obvious applications.

Just like the dot-com bubble, there is oil to be struck and definite potential in the ingenious way blockchain technology works, but that doesn’t mean anything valuable exists right now. When you look at the largest companies in the NASDAQ in 2000, you see a few familiar names like Microsoft, Cisco, Oracle and Intel. However the largest companies in the world were nobodies or non-existent in 2000. Apple? Google? Amazon? Facebook? None of them register on the NASDAQ in March 2000. Microsoft was the largest company listed on the NASDAQ during the “dot-com boom,” but even your grandma’s grandma will tell you Microsoft (to this day) is a software company, not an internet or dotcom company. (“Soft” is even in the name as a handy reminder to help you remember that.)

Like the gold rush, before the dot-com bubble, there was money to be made. But it wasn’t in the obvious way people thought, and it isn’t going to be now, either. Gold is currently at an eight-year low, and I think some of this can be attributed to people choosing to stash bitcoin instead. But if bitcoin were to just offer an alternative to gold would it warrant this level of hype?

A lot of people don’t know this, but you can’t publicly advertise “buying shares” in a company. It actually takes a bit of legal paperwork to just get investment from regular-joes that you know into legitimate companies. They have to sign forms saying they know you and have written explicitly that they understand they might lose their money. These laws are nearly universal because many people are both financially illiterate and really susceptible to hype and advertising. Over the last few centuries, we’ve gradually built up a pile of protections, almost all made after crashes and scams that pissed off voters enough to pressure their legislators.

Because cryptocurrencies are so new, they simply don’t have the regulations they should. This means a really messed up thing called ICO (Initial Coin Offerings) now exists. Initial Coin Offerings are a highly unregulated product that builds its own block chain, usually by lazily forking the open-source code base from a popular blockchain like the one powering bitcoin or etherium. (Though bitcoin was the first, there are now more than 1,200 cryptocurrencies, by the way.) Then salesmen akin to the wolf of wall street push the cryptocurrency equivalent of junk pink-sheet stocks. That’s the ICO world. It’s mostly a scam, and while there may be a return in there somewhere, if you’re buying based on a Facebook ad someone is going to be losing money and it’s probably you.

Cryptocurrencies are the incentive that gets a whole bunch of people to maintain the distributed public ledger of information we call the blockchain. The fact that I can understand and write that sentence and so many faux experts can’t is super concerning. The people telling you about this stuff in the media just can’t know that much about it. It’s taken very smart people years to get their head around this stuff. There isn’t really any formal training so you have to be able to figure things out by doing a lot of reading on technology, politics and finance. With all due respect intended, chances are the NPR show you heard has someone way out of their depth explaining something they don’t fully understand.

Back in 2000, hardly anyone in the general public really knew what “software” and “the internet” really were. That’s where we are now with the terms “cryptocurrency” and “blockchain.” Most people use them in a fairly interchangeable way, but they’re also totally different things which most people buying in can’t discern. We’re an uneducated and uninformed public that aren’t really sure what this thing is or is going to be. Anyone who tells you they know what is going on and what is going to happen isn’t someone I would trust. A lot of the people who happen to have gotten into bitcoin early now have over-inflated egos from the high returns. Cryptocurrency news and podcasts are full of these people relishing their newfound fame. They say things like “encountering resistance” and “it’s going to make a break” and see whatever they want in the next day’s price similar to someone interpreting their horoscope. They remember all their hits, and forget all their misses, because when the market is rising your ego rises with it.

I got a message from an retired friend the other day asking for information on cryptocurrencies. This is also happens to be someone who spends their time fantasizing about societal collapse and wants to live in the woods. I say this to establish he may be the last person on earth to hear about this stuff and seems to want in. A key part of a bubble is dealing with totally uninformed buyers. Who wants to miss out on easy money? No-one. For a bubble to happen you almost always have regular people getting hyped and buying into the market.

A lot of people are trying to mine (the process of adding transactions to the ledger, which may be easier to think about as cryptocurrency printing) but graphics cards are so expensive right now that it makes almost no sense to do that. Some people say they’re OK paying too much for mining equipment because they think the price will go up. Anyone with some basic finance knowledge can figure out “Person A” who buys the currency up front will have a lot more money than “Person B” who buys a mining rig after two years if the price were to go up. If the price goes down or stays flat though, we know they will never make their money back although with $3000 of graphics cards their gaming experience will be out of this world.

Will cryptocurrencies change the world? Yes, kind of. When people in the ‘90s said most of a generation would be watching movies on the internet, they sounded ridiculous. People would have said the data was too large, that networks weren’t fast enough, that computers had crappy screens, that film studios wouldn’t agree. I can see through the mist that many of the current issues with blockchain can be addressed with iterative improvements and startup businesses chopping their way through the regulations and hurdles. But right now the technology sucks in all but a few highly specifically applied ways. Many of the companies, the blockchains, and the coins that exist right now all seem like they could be a complete write-off in the long term.

It’s certainly a good idea to understand what this is beyond listening to the “experts,” just like it was a good idea to get an internet connection in 1999. But decide how much your education is worth, because it’s probably not going to be the sums that a lot of people are putting in right now. An education doesn’t require you spending $5,000 on an asset that could blow up and leave you afraid and hating it. The best thing to do right now if you want to make money on this is exactly the same as it was back in 2000: Read and write the code these platforms use, which costs nothing. Or, at least make friends with some nerd who does and try to convince them to go into business in around 5 years.